December 23, 2018
Big Disk Energy was built somewhat backwards. I designed the hub motor before the rest of the frame so I had some design limitations from the beginning. I wanted this robot to have extremely good energy transfer during hits by having a lower rpm disk, single tooth weapon, and fast drive train. To meet these goals while still delivering hard hits, I needed the frame to be able to fit a larger diameter blade. I expect that the hub motor module should be able to run some insanely large blades -I'm thinking that someday I may be able to throw a bar as big as 16" on it if I can design a frame around it but for the first version I had a target of 9", the same size as the bar I wanted to run on my previous horizontal. 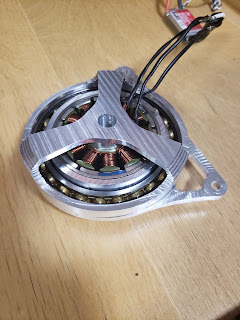 I started by sketching out the drive motors, wheels, weapon disk circle, and a rough frame shape. 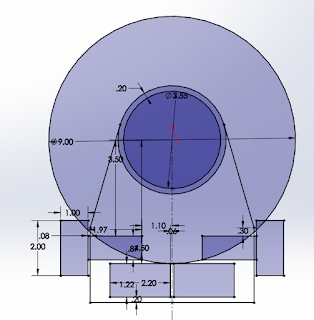 I chose to use Botkits motors coupled with Fingertech 2" foam wheels for this robot. Both of these components are known to work well in combat so I thought they would work again here.

I decided that a single-piece UHMW frame would work best for this robot so that the plastic can absorb some of the shock from the weapon module and to keep the parts count on this robot low. This should simplify construction and assembly as there is only 1 major part to the frame.

From that sketch, I fleshed out the rest of the frame, adding some weight saving pockets and space for electronics. the CG of the robot was much farther forward that I wanted so I had to push some of the components farther back to get a CG closer to the wheels. After getting it about halfway between the center axis of the wheels and the center of the weapon module I called it good because with good friction on the wheels I should be able to drive decently.

I ended up with a frame that weighed 0.45lb, which left about a pound for the top plate, battery, and weapon 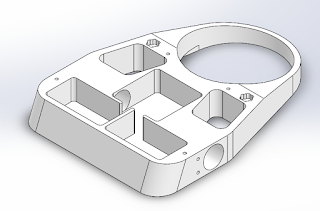 Putting everything together, the blade had to shrink a half inch in diameter to miss the wheels. This frame is machinable in 4 operations with a small amount of ball milling to make the back of the robot sloped for self-righting. 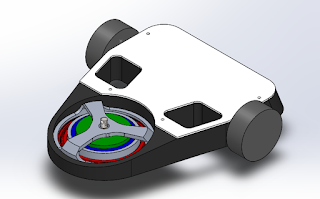 Later while machining I decided to skip on the ball milling on the front of the robot because I realized that the stator could be too exposed. The extra material in the front doesn't look as cool but gives the robot a little extra protection. 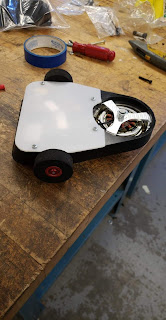 Here is the final product, complete with the drive train electronics and motors. I didn't get the blade back until the day before the event so this frame sat complete for 2 days. 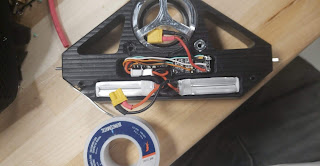 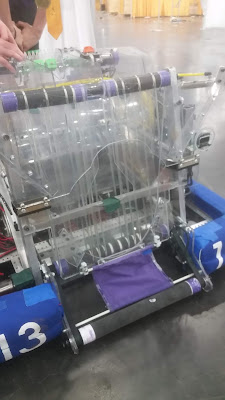